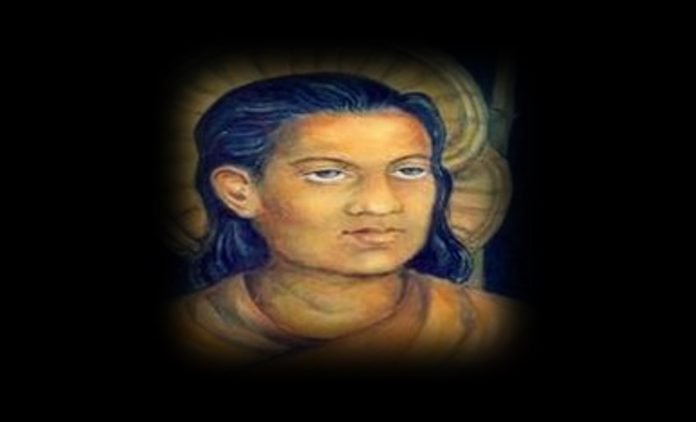 Bhima Bhoi was a saint, poet and philosopher from Odisha, India. He was a bhakta of Mahima Gosain and preached Mahima Dharma. Sant kabi Bhima Bhoi was born at Jatasinga near Subalaya, Subarnapur in 1850 and died in 1895 at Khillipali, Subarnapur. He was married to Annapurna and had two children.

His following poem became world-famous and later inscribed on the wall of UNO Hall.

“witnessing the plethora of plights on earth how one could bear with; let the world get redeemed at my cost” have even been inscribed on the wall of the United Nations Organisation (UNO) Hall in various languages.

Not much is known about Bhima Bhoi except that by birth, he was a Kondh. He was born into abject poverty and was deprived of education and a decent standard of living. He spent his early life in the area of Rairakhol and Birmaharajpur in the later-half of the 19th century. He was poor, hapless and earned his living out of agriculture and tending to cattle. He was a great poet, composer and singer. Humanity and liberation of the world got prominence in all his poetic creations.

Though Mahima Gosain, Guru of Bhima Bhoi, is said to be the original founder of Mahima Dharma, the devotional catchy Prayer verses composed by Bhima Bhoi are greatly responsible for the spread of Mahima Dharma. In the history of Mahima Dharma, Bhima Bhoi was to play the role of Vyasa the poet, expounder and propagator ordained by eternal God. Mahima dharma soon gained popularity in the tribal belts of not only Odisha but also neighboring Andhra Pradesh, Chhattishgarh, Bengal and Assam.

Bhima Bhoi wrote extensively against the prevailing socio-economic injustice, religious bigotry and caste discriminations. His mission being “jagata uddhara”(liberation of the entire world), he believed in one God, one society and one religion.

Fact is many of his works are lost during the time , but those that remain show in ample measure that the genius that Bhima Bhoi was. They are Stuti Chintamani, Brahmanirupana Gita, Adianta Gita, Chautisa Granthamala, Nirveda Sadhana, Sruti Nisedha Gita,Manusabha Mandala, Mahima Vinoda, in four volumes (unpublished ), Brihat Bhajana Mala and Bangala Atha Bhajan. His poems are highly popular among the Mahima Dharm followers.

Among all of the “Stuti Chintamani” is the most important work of Bhima Bhoi. It is a collection of two thousand stanzas. The work is a cluster of lyrics on his life, religion and philosophy.

It is hard to believe that he never got a formal education. He used to dictate his poems which were noted down and circulated among the citizens. His innovation in words which have made Bhima Bhoi immortal not only in Odia but in all literature.

ABOUT US
We are a news media venture with a mission to deliver compelling, diverse and engaging stories from across the world.
FOLLOW US
© 2022 The Indian Free Press | All rights reserved.
2
0
Would love your thoughts, please comment.x
()
x
| Reply