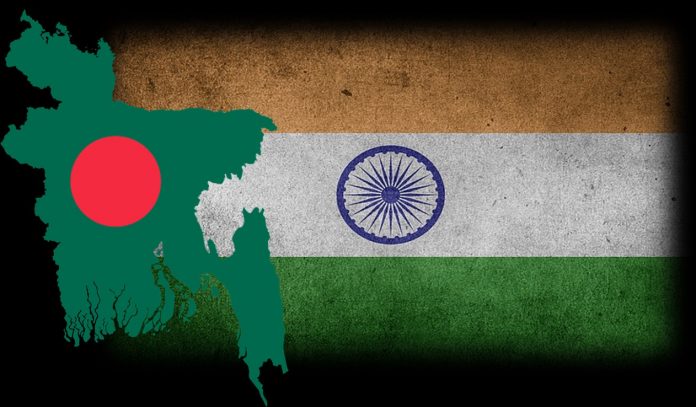 On a mid-monsoon day in the midst of this petrifying pandemic, India’s Foreign Secretary Harsh Vardhan Shringla packed his briefcase and emplaned for Dhaka on Tuesday (August 18) to convey a “special message” of Prime Minister Modi to Prime Minister Sheikh Hasina of Bangladesh. Shringla was the messenger; and of course, a message too – to enhance Indo-Bangladesh relations.

At the Ganabhaban, the official residence of Prime Minister of Bangladesh, PM Hasina and Foreign Secretary Shringla had a closed-door conversation on security issues of mutual interest and revival of the economy after the pandemic. He was the first foreign dignitary to meet PM Hasina since breakout of the virus in her state. Shringla discussed a two-year road map plan with PM Hasina and other officials in Bangladesh.

During their conversation, Momen expressed his gratitude to India for facilitating the evacuation of stranded Bangladeshi nationals from India, sending medicines and medical aids during COVID19 breakout and gifting ten locomotive rail engines on last Eid. Momen requested expedite the return of the Tablig members, early release of the 25 Bangladeshi fishermen from North Eastern Indian state Assam and start issuing visa services at an early date.

In this rendezvous, outgoing Indian High Commissioner Riva Ganguly Das was also present. Both states have inked the second addendum to Protocol on Inland Water Transit and Trade. The two signatories of this agreement have agreed to conduct the first trial run for trans-shipment of Indian cargo through Bangladesh under the Agreement on the use of Chattogram and Mongla ports.

This initiative will have a high impact on trade. In the financial year 2018-19, India counted exports worth $9.21 billion to Bangladesh. And import was $1.04 billion in this time.

The Foreign Ministers of both the states will chair a new body, Joint Consultative Commission to boost the bilateral relations. Bangladesh Foreign Secretary Masud Bin Momen will reciprocate his Indian counterpart’s visit soon to set up this commission.

The two parties have decided to kick off a few agendas to promote bi-lateral trade, connectivity and direct communication between the youths across the border. An air travel bubble service between the two neighbours will likely be launched.

The top Indian envoy Shringla, who was earlier posted in Dhaka as High Commissioner of India, assured that India would make the potential COVID-19 vaccine available for Bangladesh on a priority basis, once it’s developed.

“When the (COVID-19) vaccine is developed, friends, partners and neighbours will get it without any saying…for us Bangladesh is always a priority,” Shringla said in Bangladesh. “India produces 60% vaccines of the World” he added.

In January 2021, India will join the United Nations Security Council as a non-permanent member for the eighth time. Shringla was requested to extend support to repatriate almost a million Rohingya refugees from Bangladesh to Myanmar.

India and Bangladesh have taken several initiatives to commemorate Mujib Borsho, the birth centenary of Mujibar Rahman, the founding father of Bangladesh in 2020. The grand celebration was canceled due to the pandemic.

India and Bangladesh will be connected via a separate Akhaura-Agartala rail link. The other two collaborative rail connectivity projects Chilahati-Haldibari and Khulna-Mongla rail links will be ready by next year. Rampal Maitree power plant is being constructed in Indian assistance. India is also constructing a 1320 MW thermal plant in Khulna.

Both states emphasized to increase the speed of the connectivity projects. Bangladesh receives 28% of India’s development budget fund in foreign countries. In recent years, India has extended $8 billion to Bangladesh in Lines of Credit. Under High Impact Community Development Projects (HICDPs), India is aiding plenty of development work in the areas of education, health, water, culture, urban development, disaster management as well as community welfare.

Foreign Secretary Harsh Vardhan Shringla’s short yet satisfactory sojourn is expected to swerve the direction of bi-lateral diplomacy between India and Bangladesh, especially when neighbours are swirling in Sino-philia.

China is pulling one by one in South Asia at her side. A Belt and Road Initiative signatory, Bangladesh has received duty-free access to almost 8000 goods in China. Beijing most recently disbursed $1 billion loan to maintain water levels of river Teestaduring the drought season. The river is among the most important factors that control the flow of politics between India and Bangladesh.

India’s relations with the rest of its neighbours

The fight with the Chinese troops in Galwan valley in June aroused tension among Indians. Since PM Modi’s incumbency in 2014, the negative sentiment in Bangladesh is breeding expeditiously. After the announcement of the Citizenship Amendment Act and National Register of Citizens, anger sprang up in Bangladesh.

AK Abdul Momen, Foreign Minister Momen of Bangladesh called off his Delhi visit. Most recently some misleading and negative media coverage affected the relations between two communities across the border. At such a crucial time, top envoy’s visit is an amicable gesture and deft diplomacy. Foreign Secretary Shringla’s footprint in Bangladesh is expected to last long.

He is an Indian freelance journalist and junior fellow at Dhaka based think-tank Centre for Governance Studies. You can reach him on Twitter @Ayanangsha.The views expressed in this article are the author’s own.

This article was first published on Global Village Space.