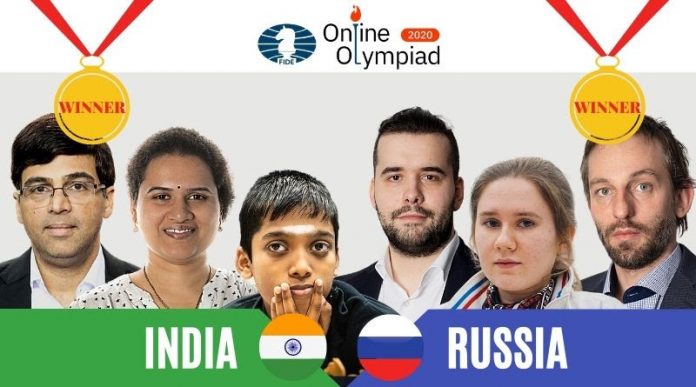 After a 3-3 tie in the first round, where all six games ended in a draw, the second and decisive match was impacted by a global internet outage, that severely affected many countries including India. Two of the Indian players, Nihal Sarin and Divya Deshmukh, lost connection towards the end of the game, subsequently losing on time. The incident happened when three games ended in draws and the outcome of the match was still unclear.

As a result, Russia was initially declared the winner of the match, after being adjudicated a victory by 4½-1½ in the second round. However, India appealed the result on the grounds that their players (along with hundreds of other users) were logged out of Chess.com as a consequence of a massive internet outage at the time of the games.

The Appeals Committee examined all the evidence provided by Chess.com, as well as information gathered from other sources about the Cloudflare crash that caused the outage. After being informed of their considerations and in absence of a unanimous verdict, the FIDE President made the decision to award Gold Medals to both teams.

It is very unfortunate that technical difficulties got in the way of the final: until that moment, the match between India and Russia had been one of the most thrilling and balanced seen at the 2020 Online Chess Olympiad. In the first round, all games ended in a draw, but it was actually a narrow escape by Russia, as India was clearly pressing for a match win. Vidit and Nepomniachtchi engaged in a fight in one of the sharpest lines of the Grunfeld defense, and just when Vidit seemed to be very close to launching a decisive attack, Ian found a jaw-dropping resource, sacrificing his rook on f2. One could call the whole plan a gamble, and probably the engines will sentence that the move was not correct. But chess is a sport (especially, rapid chess) and the counter-attack by the Russian star posed too many problems for his opponent. Nepomniachtchi created very serious threats and it was Vidit who had to go for a perpetual check.

Humpy Koneru and Kateryna Lagno also went for a sharp Grunfeld line, that evolved into a very unbalanced position: Humpy was an exchange up, but her pawn structure was destroyed, and Lagno had the bishop pair. Later on, the game transformed into an ending where the Indian had two rooks against a queen. Humpy was clearly winning, but with an exposed king and being in severe time trouble, she failed to escape the perpetual check by Lagno, and the game ended in a threefold repetition.

Kosteniuk was probably the only Russian player who enjoyed a favorable position in the first round. She came out of the opening with the pair of bishops and better piece placement, and with a steady hand, she took the game to a better ending. It was probably the right decision, but the endgame advantage proved to be more difficult to convert than it seemed at first, and the game ended in a draw, the sixth in the match.

The second round started with important changes in both teams: India threw Anand into the battle, Vidit moved to board two replacing Harikrishna, and Nihal Sarin replaced Praggnanandhaa. On the Russian side, Dubov, Goryachkina and Esipenko replaced Artemiev, Lagno, and Sarana, respectively.

Anand played very solidly against Nepomniachtchi, probably as a part of a team strategy where India put its hopes mainly on the lower boards. Vidit, playing with White, accepted a pawn sacrifice by Dubov, an ingenious plan that allowed Black to quickly activate his pieces and get very comfortable play. The two top boards ended in a draw.

Aleksandra Goryachkina scored the only victory for the Russian team, against Humpy Koneru. The runner up of the 2020 Women’s World Championship played a good game, where she obtained an advantage and once again demonstrated her excellent technique. This game was affected by connectivity issues, as Humpy got disconnected and, even though she could reconnect before her time run out, she lost some very valuable time.

Two other games were affected by the same issues came to an abrupt end. At the moment of disconnection, Nihal Sarin was defending his grounds against Andrey Esipenko who enjoyed a certain advantage. At the girls’ board, Divya Deshmukh was on the verge of a victory against Polina Shuvalova. It was just a matter of time until a decisive attack was launched. “Under this time control, having an attack against the king is like being one pawn up”, joked Kramnik about the position on this game. The engines actually evaluate the position +2 in White’s (Divya’s) favor.

With one of the two games very likely to be an Indian victory, the match seemed destined to be decided again in an Armageddon game. But the incident with disconnection did not let it happen. The ensuing decision, under these unprecedented circumstances, was to award gold medals to both teams. Even if shared, this can be considered the first victory of India in a Chess Olympiad, and the first one for Russia since 2002.

Here are the twitter IDs of the Indian Team:

Prime Minister Narendra Modi and Home Minister Amit Shah along with other dignitaries congratulated both Indian and Russian team for the victory.

Congratulations to our chess players for winning the FIDE Online #ChessOlympiad. Their hard work and dedication are admirable. Their success will surely motivate other chess players. I would like to congratulate the Russian team as well.

Congratulations to Team India on winning the FIDE online #ChessOlympiad. This has been possible because of the unparalleled commitment of our chess masters. I am sure this stellar achievement will further the spirit of our young players across the nation.