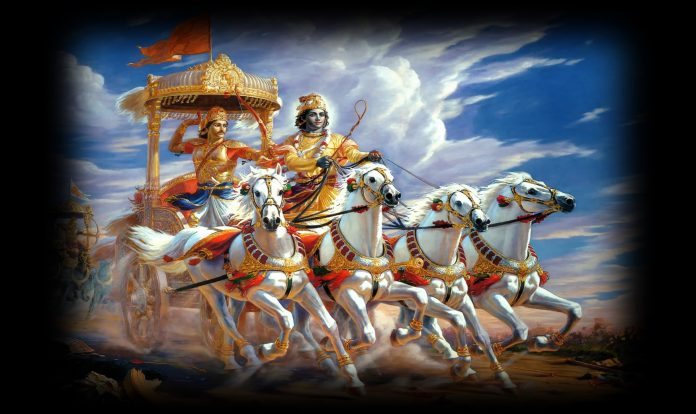 Bhagwad Gita, an Indian epic, dated 5000 years, provides an answer to the question, how to win over equals? For those who are not so familiar with Bhagwad Gita, I may mention that it is a dialogue in the battlefield where two armies equally equipped (fierce competitors) are facing each other. It is a dialogue between the fiercest warrior of one of the armies, by the name Arjuna, and his mentor, by the name Krishna. Krishna has been adorned by many believers in India as one of the incarnations of God.

[You can read the Part -I of this series here]

Let me digress for a moment and say that God in the Indian culture signifies that primordial power (energy) that generates, operates and destroys all creations including human beings, animals, trees, mountains; as a matter of continual life cycle. It is in this sense that GOD may be viewed as an abbreviation of the primordial forces of Generation, Operation, and Decay or Death (to recreate).

The first verse is as follows:

The 700th verse is as follows:

What it means is that wherever there is Krishna and Arjuna, victory happens there; that is time tested truth/policy; and my opinion too. Indeed, it has immense insights in the matter of winning over equals. The two armies characterize equal competitors of modern-day business battling for Number One.

Question becomes: why must always win the side wherever is Krishna and Arjuna? This is so because Krishna does not signify a person, but the phenomenon of right positioning of the chariot (visioning of business), and Arjuna, the phenomenon of focused action. In modern lexicon, Krishna and Arjuna signify the right mission and vision and focused action, that is, doing things right, and rightly. (Arjuna, as per legend, has been a character famous for focused action, as while shooting a sparrow’s eye as part of his archery training, he is credited saying that he neither sees the tree on which the sparrow is sitting, nor sparrow, but only the eye of the sparrow. That is a perfect focus without any distraction).

Winning over equals will require that much focus. Indeed, the formula of success or winning may be stated as the sum total of vision plus focused action. Winners know clearly where they want to be and pursue it single-minded.

The Krishna-Arjuna framework has complete acceptability in Indian businesses, as I have noticed during my management development programs. In many of my management development programs, when I related this book and the formula, many participants have reverted with a very interesting question. The question often asked is: What if Arjuna was not to fight with his bow and arrow, but by some other weapon? Would the success be still on the side where Krishna and Arjuna were?

I have invariably rebounded this question to the participants. Interestingly, a large majority of participants have often answered in affirmative. My answer has been, however, No. To my mind, focused action requires appropriate tools and techniques. ‘Winning strategies need winning mechanisms’ noted Mark Jewel (Mark Jewel, 2007). The relevant competence is very important. In my work experience, low performers invariably lacked competence, more than the willingness to perform. That is why, as a policy, one chance of development to such employees I have always provided before thinking of separation.

Another profound question that had come often: what if Krishna would not have Arjuna with him, but one of the other four brothers of Arjuna. Would the success be still on the side where Krishna and Arjuna were?

My answer has been, No. To my mind, focused action requires the compatibility of the minds of the members of the team; particularly, under conditions of stress of fierce competition or battle. Since the time is invariably too short to make a move or respond, a high degree of cooperation among team members is necessary. The minds of Krishna and Arjuna were most compatible as they listened to each other willingly and attentively. It is the teams that win and not the individuals, howsoever bright.

Does luck have to do something with success? has been another question often raised in my sessions. My answer invariably is: Yes, but 0.13%. With vision and focused action, normally speaking, mean plus/minus three standard deviation territory may be covered, the remaining 0.13% area, as under the normal curve, is the area of luck. (Luck to me signify forces and factors uncontrollable at the level of a manager).

Bhagwad Gita provides a quintessential answer to the question, how to win over equals? The answer is ‘right positioning (visioning) and focused action’. The answer is simple but profound. If someone says that quintessential is fine but the devil lies in the detail. It is quite acceptable. The message, however, is that even at the cost of simplicity, which by itself has much value when we try to make generalization across borders and cultures and not talking of specific situations, the global competitors in order to win over equals have to have right positioning (visioning) of their businesses and focused action. Focused action will, of course, requires competent people and a compatible team. We have found that the mind-body diagnostic framework for building a winning organization (Sathe, Vijay and Smart, Geoffrey – 1997) is quite close to the Krishna-Arjuna framework.

Dr Sat Parashar is a Professor and Financial Advisor. He may be reached at sparashar@financialguide.com

Note: This article was originally published in International Journal of Indian Culture and Business Management 2008 – Vol. 1, No.3, pp. 354 – 359. For complete references, may please see the original.